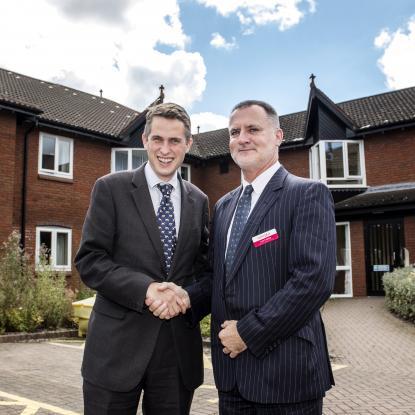 Government chief whip Gavin Williamson visited a retirement living community during the House of Commons recess; to see how supported housing changes lives and to discuss the impact of proposed changes in funding.

The MP for South Staffordshire dropped-in on Corsers Court, in the Staffordshire village of Coven. The development is managed by Care Plus, part of Housing Plus Group and offers independent living in 62 apartments and bungalows.

Changes to funding for the sector will take place if the local housing allowance (LHA) cap is applied to supported housing. The cap links housing benefit payments to local housing costs and doesn’t cover charges for essential wellbeing services.

The charity Mencap said that the proposed cap has caused 80% of plans for new supported housing to be put on hold and 40% of existing schemes to be threatened with closure.

As the major supported housing provider in South Staffordshire, Housing Plus Group is calling on the government to think carefully about the impact of funding changes. Care and support director Les Clarke welcomed the interest shown by Mr Williamson.

“We stressed the fundamental need to base future funding on the actual cost of delivering supported housing,” he said. “We also discussed the fact that LHA rates do not reflect the local housing market. Much of this area is covered by cap for the Black Country, where housing costs are significantly lower. The proposed cap will place South Staffordshire constituents at a considerable disadvantage.”

Mr Williamson described himself as a ‘fan’ of supported housing, saying: “Schemes like Corsers Court give residents real choice and independence. It has been very interesting to learn more about the facilities and support available and to meet care staff and residents today, as well as the management team. I will be taking up the points raised with housing minister Alok Sharma and look forward to further discussion with Care Plus following the publication of the supported housing Green Paper later this year.”