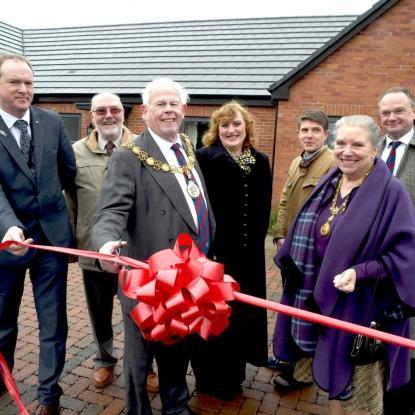 A special ribbon cutting and tree planting ceremony has marked the official completion of a project that’s transformed the Holmcroft area of Stafford with the construction of 40 new homes.

Civic leaders and local residents joined representatives from Housing Plus Group and the housing association construction partner Jessup to mark the success of a scheme that included the replacement of 14 bungalows in Woodlands Road.

The original properties on the site no longer met the high standards set by the area’s leading provider of affordable homes and the project also provided the opportunity to build a mix of much needed two, three and four-bedroom houses in nearby Second Avenue.

Led by Stafford and Rural Homes, now a member of Housing Plus Group, the ambitious project also had the support of Stafford Borough Council and received £1.13 million funding by Homes England.

Welcoming guests to the ceremony, Sarah Boden, Housing Plus Group Chief Executive, commented: “A huge amount of work from a large number of people has made this development possible and we are delighted to be able to celebrate what is a significant investment in the local community.

“As part of a new family of businesses rooted firmly in the communities they serve, SARH will continue to invest in delivering the affordable, quality homes to meet local needs.”

The Woodlands Road development has received unanimous support from residents in the area, with local councillors Jonathan Price and Bryan Cross MBE playing a pivotal role in bringing the community onside.

“From the outset Cllr Price and I worked closely with SARH and the developers to ensure local people had a say in the plans and were kept up to date on the work,” explained Cllr Cross.

As well as providing a total of 27 homes for affordable rent and 13 for shared ownership, the regeneration project has also delivered a boost to the local economy and a range of employment opportunities.

Jessup Chief Executive, Clive Jessup, explained: “Throughout the project we’ve drawn on the skills of local tradespeople while employing apprentices from Stafford and surrounding areas.

“The main beneficiaries however are the SARH customers who will live in these properties and we are proud to be involved in the scheme.”

Prior to the tree planting Harpreet Rayet from SARH introduced a video highlighting key milestones in the regeneration of the area and explained how elderly residents were able to remain in their old bungalows whilst watching their new homes being built.

“I’m really proud of this development as we recognise that projects such as this are not just about bricks and mortar but about building a community,” he said.

Cllr Jeremy Pert, Cabinet Member for Communities and Health at Stafford Borough Council added: “This project really does demonstrate the power of partnerships in delivering the wishes of residents who want great affordable places to live, work and thrive; with homes of all types and tenures, which in this case also includes a number of bungalows.”