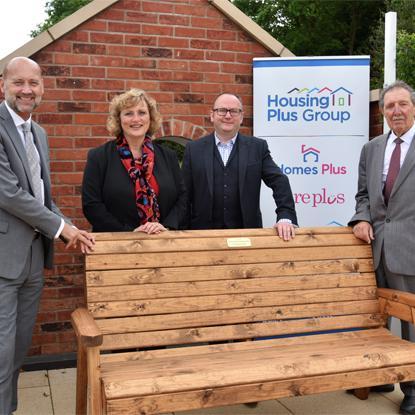 A memorial to a much-loved and well-respected local councillor has been unveiled on the site of our £3.2 million housing project in Kinver.

Councillor Brian Edwards MBE was a passionate supporter of our development, which is now set to provide high-quality retirement living for older people in the popular village.

A former leader of South Staffordshire Council, Councillor Edwards sadly passed away in 2021 while work on the Burgesses development was well underway, and this week a memorial bench was installed on the site in recognition of his commitment to the local community.

At a special dedication ceremony, Councillor Edwards’ family, his former colleagues at the council and other stakeholders joined us to pay tribute to all his hard work and support for a vision to provide more suitable homes for older residents in the village.

Sarah Boden, Housing Plus Group chief executive, explained: “We are extremely grateful to Councillor Edwards for his tireless campaigning on behalf of local residents and his backing for a project that was designed specifically for people over 55 who want to live independently.

“I’m delighted that Councillor Edwards’ family were able to join us to see the memorial bench being unveiled, which will provide a fitting reminder of his work, and a quiet spot where residents can sit and enjoy their surroundings in this beautiful Staffordshire village.”

Now home to 23 residents who also have the reassurance of access to care and support provided by our care company, Care Plus, The Burgesses was built on the site of several bungalows that no longer met our organisation’s high standards.

It also benefits from photovoltaic panels that supplement the building’s electrical supply and a range of communal facilities, including an attractive rooftop terrace.

Councillor Edwards’ son, Chris, commented: “Our father thought it was very important to provide a facility like The Burgesses for the benefit of Kinver residents and, as a family, we would like to thank Housing Plus Group for recognising his support.”

The ambitious project was completed late last year by our construction partner S J Roberts Construction Ltd and benefitted from a £1.1 million Social Housing Grant from Homes England, and additional funding of £145,000 from South Staffordshire Council.

“He was passionate about the district and his Kinver residents. As well as being Leader of South Staffordshire Council, Brian also represented Kinver on the parish council.

“He was an exemplary Leader; fair, honest, and generous with his time - and he is missed by us all. I am sure this bench, in memory of Brian, will act as a reminder of the exemplary service he gave to South Staffordshire and, in particular, Kinver.”